The naturally occurring plant compound, Kinetin (N6-furfuryladenine), is the key to Kinerase Skincare Products' beneficial effects on the skin's appearance. Kinetin was discovered in 1955 by Professor Folke Skoog and his team of scientists from the University of Wisconsin. When the scientists tested the effect of Kinetin had on plant cells, the scientists were amazed to find that it dramatically promoted cell growth. Further research revealed that Kinetin naturally occurs in numerous plants and can be found in coconut milk, carrot root, and even in tobacco. It is a biological growth factor that prevents the leaves of plants from drying out and withering. The scientists named this compound Kinetin, which is derived from the scientific term, kinesis, referring to the natural ability of living organisms to promote cell growth and movement in response to stimuli.

More extensive research was conducted since 1955 on Kinetin in order to discover its full potential and possible applications. Another breakthrough occurred in the evolution of Kinetin research in 1994 when Dr. Suresh Rattan and his team found that Kinetin exerted its cell growth and division effects not only on plants and fruit flies, but also on human skin cells. This effect is also seen on aging skin cells, and it was observed that Kinetin is able to delay and prevent changes in skin cells that occur due to the process of aging. After this pivotal discovery, the compound Kinetin was patented in the US, and the skincare brand Kinerase was launched which exclusively features Kinetin in its entire range of products.

The remarkable anti-aging effects of Kinetin was extensively researched and clinically proven in various clinical studies. It was found that applying 0.1% Kinetin cream or lotion twice daily visibly improved photo-aging in the skin. Furthermore, Kinetin improved the moisture retaining ability of the skin. Studies show a decrease of up to 26% in trans-epidermal water loss with regular application of Kinetin on the skin. Thorough clinical studies also demonstrated an excellent safety profile for Kinetin and the Kinerase line of skincare products, which makes Kinerase suitable for all skin types, including extremely sensitive skin after aesthetic procedures, photo-damaged skin, as well as irritated skin conditions such as rosacea and eczema.

Backed up by extensive positive research and study results, Kinerase became a highly recommended brand of skincare experts and dermatologists worldwide. Kinerase effectively helps to reduce the appearance of fine lines and wrinkles, and improves the skin tone and texture. In addition, it also diminishes skin blotchiness and hyperpigmentation due to sun damage, and increases the overall hydration level of the skin so that it is maintained at a steady state of optimum hydration. With regular use of Kinerase over time, aging skin remains supple, healthy and youthful. 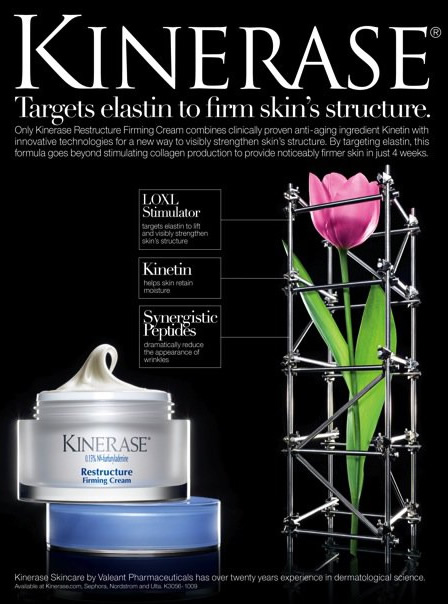 The Kinerase skincare line has recently introduced two new products that have already acquired glowing reviews from their users – Kinerase Restructure Firming Eye Cream and Kinerase Restructure Firming Cream. Both of these innovative products feature advanced elastin-strengthening technology in addition to the core 0.15% Kinetin formula. The elastin strengthening technology consists of the function of key powerful active ingredients, including:

Kinerase Restructure Firming Eye Cream is a hypoallergenic anti-aging eye cream that instantly diminishes fine lines, as well as strengthens and firms the skin over time. With regular use, crow's-feet and fine lines and wrinkles around the eye area will become much less noticeable. The luxurious eye cream is rich in texture and drenches the skin surrounding the eyes with moisture to instantly firm the skin and brighten the eye area. Kinerase Restructure Firming Cream is an anti-aging moisturizer for dry, aging skin which effectively hydrates, firms and improves the skin’s tone and texture. The rich and nourishing formula dramatically tightens and smooths the skin, softening visible lines and wrinkles and keeps the skin well-moisturized. 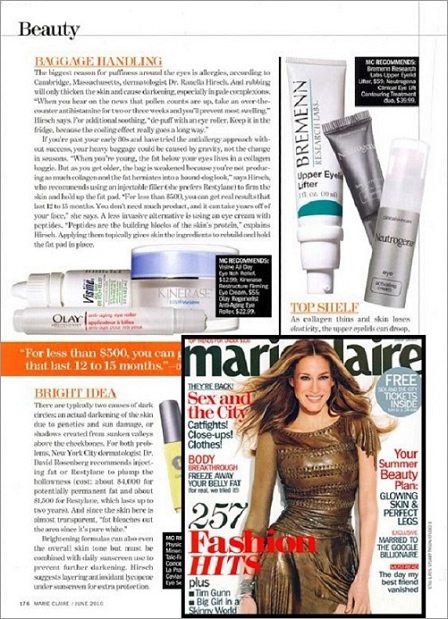 Now, you know about the benefits of Kinetin, Kinerase and Kinerase Restructure Firming Products!