Posted by EDCskincare.com on 8/9/2012 to Product Review

The AminoGenesis formula was created as a result of over 40 years of research and development by a world-class expert team of scientists and doctors led by Dr. T. Joseph Lin, Ph.D. The scientifically advanced formula is the basis of all the products in the AminoGenesis skincare line. 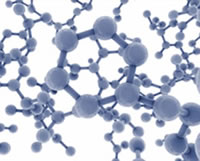 The science behind AminoGenesis is dependent upon the basic physiology of our bodies. Amino acids are essential for proper function of all biochemical processes that occurs inside the body, and when it is not available, or available in inadequate amounts, these processes, including the body’s natural repair process begin to malfunction. As far as the skin is concerned, the most crucial proteins are its main structural components – collagen and elastin. Collagen is the component that binds the cells together in the body, while elastin is the component that allows the skin to stretch and contract properly. Together, these two molecules constitute 84% of normal, healthy and undamaged skin. Both of these molecules have complicated structures that are composed of fixed amounts of essential amino acids in specific ratios. Both collagen and elastin are vulnerable to damage from internal and external factors and becomes degraded as a result. In addition, amino acids are also the main components of the skin’s Natural Moisturizing Factor, or NMF. The NMF performs the function of holding and regulating the water content of the skin, and is thereby directly responsible for the suppleness and hydration of the complexion. Many skincare issues arise due to insufficient amounts of the essential amino acids, which lead to inadequate production and replacement of collagen and elastin, as well as incorrect moisture balance in the skin. 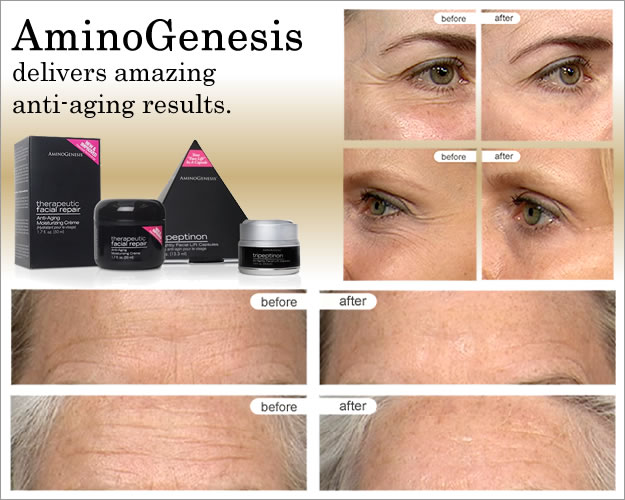 The AminoGenesis formula functions as an exact, tailor-made nutrient especially for the skin with all the essential amino acids in precisely the correct quantity and balance to replenish the required amount of collagen and elastin. The formula is comprised of water and 17 essential amino acids in optimum compositions to mimic those of collagen and elastin. This allows faster and more efficient production of collagen and elastin to enhance the body’s natural repair process. As a result, AminoGenesis products work effectively in the healing of wounds and scars, alleviate the symptoms of allergic reactions and dermatitis, as well as reduce the signs of aging and sun damage, including lines and wrinkles and hyperpigmentation.

Additional beneficial properties of AminoGenesis include its water-based delivery system which renders it capable of fast and deep penetration into the skin. The formula temporarily reduces skin surface tension to allow absorption, and the molecules in AminoGenesis products are small enough in their molecular size and weight to allow maximum penetration. Moreover, the formula has electro static properties that are correct and compatible with the skin’s own natural electro static charge.

As Seen On ABC's The Doctors

One of the most highly recommended products from the AminoGenesis skincare line is the AminoGenesis Cocoon Total Body Emollient. The product was featured on ABC’s The Doctors television show as an effective remedy for dry, cracked heels and itchy, flaky skin. The new and improved formula is enhanced with Preventhelia™, AminoGenesis’s patented novel peptide that helps to protect the skin from both oxidative as well as carbon free radical damage. The breakthrough peptide technology works effectively to prevent signs of premature aging and maintains the skin’s elasticity by stimulating the production of collagen and elastin, preventing moisture loss from the skin, as well as forming a protective barrier to protect the skin against bacteria. The formula is safe enough to be used by pregnant women and cancer patients undergoing chemotherapy, and is powerful enough to relieve more serious skin conditions such as psoriasis, dermatitis, eczema, rosecea and burns.

Now, you know everything about AminoGenesis!