The Debate on Mineral vs. Traditional Makeup

Mineral Makeup On the Rise

One thing is clear, however, these days women are buying mineral makeup in much larger quantities than before. According to results from market research data, sales of mineral makeup from prestigious brands grossed a total of $195 million in 2010, which is 6% sales of total cosmetics sold that year in the US, and the trend has since been increasing. In addition, this figure does not include the sales results of mineral makeup from mass drugstore lines such as Revlon, L'Oreal and Maybelline. 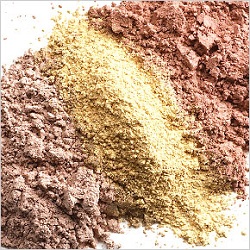 Mineral Makeup Started in the 70s

In the mid 1970s, the brand Bare Escentuals began what it later termed as "the mineral revolution", when it first launched its loose mineral powder foundation. Due to its success, various competitor brands soon followed, all of which claim that mineral makeup is more "natural" than traditional makeup.

One of the main differences between mineral makeup and traditional makeup is not what ingredients it contains, but actually what is left out. What is left out includes: the presence of preservatives, parabens, chemical dyes and fragrance, all of which are very likely to cause skin irritation. Mineral makeup is often highly recommended by dermatologists because it is less likely to cause allergic reactions in women with sensitive skin, and since it doesn't contain oil, will not clog pores and aggravate breakouts in people with acne-prone skin.

What about the skincare benefits that many mineral makeup brands claim that their products have? Titanium dioxide and zinc oxide are both natural physical sun blockers. Therefore, having an even coverage of mineral makeup on your skin automatically provides some sun protection. However, the sun protection is only to a limited extent, and a sunscreen with higher SPF is required to prevent over-exposure to the sun. In addition, zinc oxide is a FDA-approved skin protectant with anti-inflammatory properties. Mineral makeup formulas often contain a higher concentration of zinc oxide compared to traditional makeup, and are thus more capable of exerting calming and soothing effects on irritated skin.

Mineral makeup has extended far beyond its beginnings as a loose powder foundation. Nowadays, blusher, bronzer, lipstick, eyeshadow and liquid foundations are also included under "mineral makeup products". Formulas have become more and more complicated as more functions are required. Therefore, one must be aware of brands of mineral makeup that have, in fact, deviated too much from the simplistic philosophy of the original mineral makeup. Some of the brands that still retain the best properties of mineral makeup include, GloMinerals and Colorescience, which make the most out of the least possible number of ingredients, provide natural sun protection, as well as soothing, calming benefits.